In April 2017 the Ó Bhéal poetry event celebrated it's 10th year running every Monday night with the exception of three Mondays mid winter.   Its home is upstairs at The Long Valley, Winthrop Street, Cork.   The director of Ó Bhéal is Paul Casey who has been at the helm since its inception.

The evening starts from 8:30 pm with a selection of poetry-films followed from 9:30 pm by the Five Word Challenge.  Five words are offered by the audience members (one maximum per person) and heads down for 15 minutes as poets compose their responses.  Afterwards, the mic is open and those that are ready read their poem.  The winning poem is selected by the emcee based on audience response (clapping etc).  The winner reads their poem again and is awarded with a free drink from the bar and a book or two of poems.

After a short break the guest poet(s) are introduced around 10 pm.  This is a great opportunity to hear voices, known and unknown.  It has certainly broadened my knowledge of living poets.  A listing of all guest poets that have read in the past and a look into the future is available on the Ó Bhéal site. Poetry books by guest poets and Ó Bhéal publications are usually available for sale.

Another poetry film or selection of poetry films are shown during the break after the guest poet has read and before the Open Mic kicks off.  Anyone who wishes to read during The Open Mic adds their name to the list during one of the breaks.

At the Open Mic all poets are welcome and supported, whether it is their first time or have been attending for all of the 10 years.  I came to Ó Bhéal for the first time in Feb 2016 and participate in the Five Word Challenge and Open Mic most nights.  I was so pleased to have had my poem selected as the winning piece for the Five Word Challenge on Monday 19th June 2017.  My tipple was a large tonic water, a copy of Five Words, Volume X, [Poems from the 4th Five Words International Poetry Competition and from 50 Five Word challenges April 2016 to April 2017] published by Ó Bhéal Press and 'A Butterfly's Wing' by Vivienne McKechnie, published by Arlen House.  I have just now read her poem 'Empty Nests' and a swing connects us.  The guest poet on Monday night was Jo Slade and I reach for her book 'The Painter's House', published by Salmon Poetry and open the page at 'The Handyman's Daughter' to find 'a different space', a space of emptiness.

The lovely thing about this event is the randomness of who you might meet.  On this Monday night I met Mo Harte from Dublin who had earlier participated in a 'walking backwards with mirrors' event in Cork. 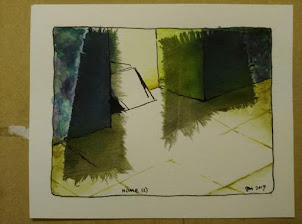 Pen, ink and watercolour on linen and paper.

Promote Your Page Too